This weekend one of my best friends got married. He and I grew up together and have lots in common (like a love of good whiskey and a knack for getting into trouble around each other) but are also different in some pretty significant ways. As an illustrative example, I want to have a small wedding in the mountains and have wedding-related activities include fishing and hiking. He, on the other hand, had a massive, black tie, country club affair that had golf outings. Although The Boy and I prefer Patagonia to Prada, when given an excise to play dress up, we’ll take it.

On Friday night we had the rehearsal dinner and The Boy wore a Zenga shirt and blazer and I wore an Adrianna Papell crochet dress.

I am not a model. Image from polyvore.

I discovered Adrianna Papell this summer when I got hungry and stuck in Nordstroms. Do you ever get so hungry that you can no longer function or disengage and you find yourself wandering around doing things you don’t want to do but unable to stop yourself? That’s what happened when returning some boots- I wandered upstairs and found racks of dresses and nearly every one that caught my eye were all by the same designer. I tried one on, it fit perfectly and yada yada yada now half my work wardrobe includes her beautiful dresses that dress up, dress down, and are fun yet easy to wear. 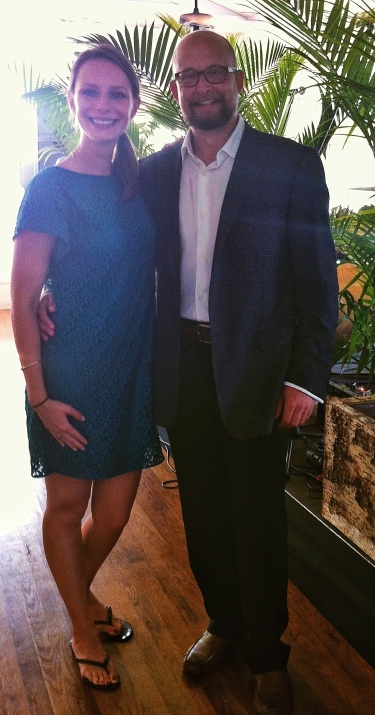 As stated earlier, not a model. But this teal lace number dresses up or down, as it was for this low-key beach wedding we were at over Labor Day (the only reason The Boy is so fancy is because he was the officiant. He changed into Patagonia seconds after this picture was taken).

The wedding on Saturday was one of the fanciest parties I’ll ever get to go to and so I wanted to find a dress to feel pretty (girls know exactly what I’m talking about, guys may have no idea). I am a nut for a bargain so I went straight to the Saks Fifth Avenue outlet and man did I ever get lucky. I found a Carolina Herrera gown that was on sale for 30% off and they took an additional 30% off  because of a broken zipper (the price adjustment was more than enough to cover the cost of alterations). Carolina Herrera gowns typically cost thousands of dollars, and I got this for the same price you can get a cocktail dress at Banana Republic. The Boy saw how excited I was about my dress so he invested in a beautiful Armani tux. I think we cleaned up pretty well.

Both Friday and Saturday night were fancier than our own wedding will be, so it was great to have an excuse to play dress up while celebrating the marriage of one of my oldest and dearest friends.