On Friday we went up to Boulder to hike the 1st/2nd Flatiron trail. One of my colleagues does mountain rescue and he was saying that the hike was one of his favorites as you have great views of Boulder from the Flat Irons and it wraps around the back for a panorama of the Continental Divide. My brother was in town for my birthday and he wanted to climb a 14er but I know that like me, he can be overambitious, and given his sea legs and history as a smoker, I thought that something a bit mellower paired with beer as the carrot on the stick would probably be the best. The hike was largely non-technical with the exception of a 25 foot scramble that made me thankful we didn’t have our dogs (although another pup hiking near us seemed to weather it fine). The views of Boulder and the Flatirons were spectacular as promised, but the real icing on the cake was the view of the Continental Divide, complete with a rainstorm in the distance.

This picture does not do the view justice. We recently celebrated our one year anniversary of living in Colorado and I don’t think I’ll ever get sick of having views like this in my backyard. 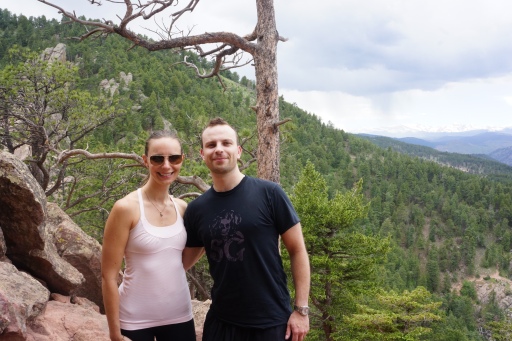 He’s my baby brother, but everyone thinks we’re twins. I seriously don’t see it.

As I promised my brother, beers always taste best after you’ve earned them so we started at Next Door to the Kitchen, hopped across the street to the West End Tavern (I had the Asher Ginger Bomb beer which was great), then finished at Pizzeria Locale, which is one of of favorite places to eat in Boulder. I think the only thing we didn’t do in Boulder (which you should do if you find this on the internet and use it as a template for what to do in Boulder) was hit up Mountain Sun. What a memorable last hike of my 20s!