Our old, beloved, lab-retriever, Tyke went in yesterday to have a tumor removed from his shoulder. 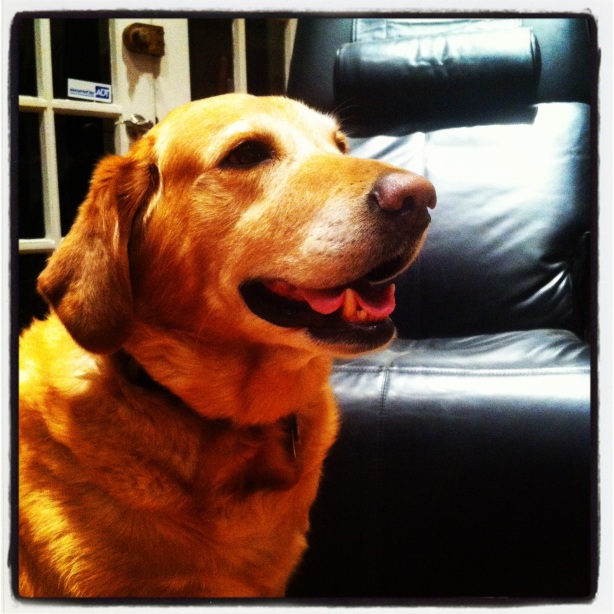 It’s possible it’s just a fatty lump, but it’s also possible that it’s a malignant tumor. Part of the reason we took Tyke to Mt. Sanitas over the weekend was so that he could have a good adventure before he was laid up for a few weeks. Regrettably, it seems as though on that adventure, he bumped his ear and got an aural hematoma. Hence, our wonderful, beautiful boy had to go in for double surgery yesterday- draining, stitching and stenting the hematoma, and a triple (!) lumpectomy that included some muscle and bone removal.

Cone to protect his ear and shirt to protect the surgical staples on his shoulder. I know I’m biased, but isn’t he a cutie?

See, I’ve already raved about our dogs. They are smart, funny, sweet, and gentle. Wally was incredibly sensitive when he was around his big brother last night, giving him tons of space and being very calm. Although Wally can have a stubborn streak, yesterday he “got” that I needed him to listen, and effectively responded to hand commands so as not to confuse Tyke. Tyke, even though he seemed to be in pretty significant pain last night (don’t worry, I was a good dog mom and made sure I was giving him his meds and regular cold compresses) just whimpered. He never snapped or growled, still tried to follow commands (even when they were being given to Wally, Tyke is just that eager to please), and seemed to only want to be with me (The Boy was in California for work). There was a pretty crazy moment where it was around 3 am and I was laying on the floor with him (he progressed from wanting me to touch him, to wanting to see me, to wanting me to have my hand in the cone so he could nuzzle his muzzle against me) and instead of being frustrated or tired that he had been whimpering for literally hours and I had a pretty important meeting today, I was so thankful that he was such a sweet boy, that I was capable of loving and caring for him, and that we were part of the same pack. Sleeping on the floor with my dog’s giant, groggy, adoring head in my hand was on of the most uncomfortable comforts I’ve had the pleasure to experience. Here’s wishing for many more years of sloppy kisses and wet noses from our lovable old man.

One thought on “Tumor Tyke”